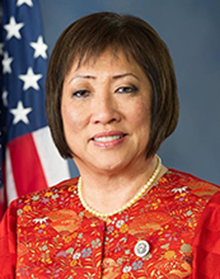 Colleen Wakako Hanabusa (Japanese: 花房コリーン若子, Hepburn: Hanabusa Korīn Wakako; born May 4, 1951) is an American politician serving as the U.S. Representative from Hawaii's 1st congressional district, since 2016, previously holding the position from 2011 to 2015. She is a member of the Democratic Party and ran for her party's nomination for Governor of Hawaii in 2018, challenging and losing to incumbent Governor and fellow Democrat David Ige. Before her election to the United States House of Representatives, Hanabusa was a member of the Hawaii Senate. She served as the Senate Majority Leader before being elected Hawaii's first female President of the state senate in 2007. On August 24, 2011, she announced her intention to run for reelection to Congress. On December 17, 2012, after the death of Senator Daniel Inouye of Hawaii, it was announced that Inouye had sent a letter shortly before his death to the Governor of Hawaii, Neil Abercrombie, stating his desire that Hanabusa be appointed to the seat. Abercrombie decided against appointing Hanabusa and selected Lieutenant Governor of Hawaii Brian Schatz instead. Hanabusa announced a Democratic primary challenge to the incumbent Schatz in the 2014 special election, but lost in a close primary contest.
In 2016, Hanabusa announced her intention to run in the 1st congressional district special election to fill the remaining term of Representative Mark Takai, who died in July 2016, and she won the Democratic primary for the race on August 13, 2016. Hanabusa also won the election on November 8, 2016 and was sworn in on November 14.