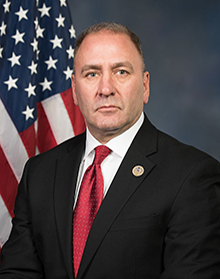 Glen Clay Higgins (born August 24, 1961) is an American politician and reserve law enforcement officer from the state of Louisiana. He is the U.S. Representative for Louisiana's 3rd congressional district. He won the runoff election held on December 10, 2016, in which he defeated fellow Republican Scott Angelle. Although an elected official, Higgins continues to hold a law enforcement commission as a Reserve Deputy Marshal of the Lafayette City's Marshal's Office in Lafayette, Louisiana.