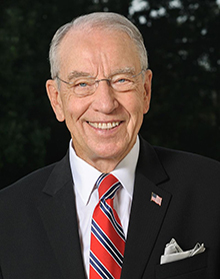 Charles Ernest Grassley (born September 17, 1933) is an American politician serving as the senior United States Senator from Iowa, a seat he was first elected to in 1980. A member of the Republican Party, he previously was a member of the United States House of Representatives (1975–1981) and of the Iowa House of Representatives (1959–1975). He chaired the Senate Finance Committee from January to June 2001, as well as from January 2003 to December 2006, and is now the current Chairman of the Judiciary Committee of the 115th Congress. In January 2019, Grassley will become the most senior Republican serving in the United States Senate due to the retirement of Orrin Hatch and the resignation of Thad Cochran. Should the Republicans maintain control of the Senate after the 2018 Senate elections, Grassley will presumably become the chamber's President pro tempore.