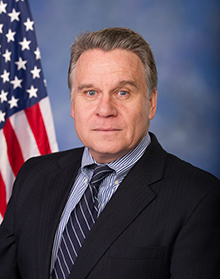 Christopher Henry Smith (born March 4, 1953) is the U.S. Representative for New Jersey's 4th congressional district, serving since 1981. He is a member of the Republican Party. The district includes portions of Mercer, Monmouth and Ocean Counties. He is currently the dean of the New Jersey congressional delegation. In August 2017, Smith was nominated by President Donald Trump to become a representative to the United Nations General Assembly. He was confirmed by the United States Senate on October 5, 2017. He served in the same capacity in 2015 after being nominated by President Barack Obama.

Tweets by https://twitter.com/RepChrisSmith
Subscribe
Please login to comment
0 Comments
Inline Feedbacks
View all comments
wpDiscuz
0
0
Would love your thoughts, please comment.x
()
x
| Reply
You are going to send email to