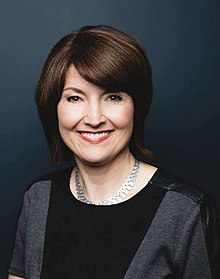 Cathy Anne McMorris Rodgers (born May 22, 1969) is an American politician from Washington where she has served as the U.S. Representative for Washington's 5th congressional district since 2005. The district includes Spokane and the eastern third of the state. McMorris Rodgers is the highest ranking Republican woman in Congress, serving as Chair of the House Republican Conference. From 1994 to 2004, she served in the Washington House of Representatives, where she became Republican leader.