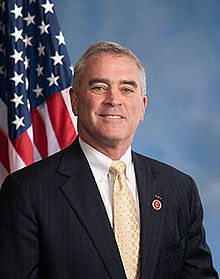 Brad Robert Wenstrup (born June 17, 1958) is an American politician, U.S. Army Reserve officer, and Doctor of Podiatric Medicine, who has been the U.S. Representative for Ohio's 2nd congressional district since 2013. A Republican, he defeated U.S. Representative Jean Schmidt in the 2012 Republican primary election and Democrat William R. Smith in the 2012 general election. Wenstrup is a colonel in the U.S. Army Reserve and an Iraq War veteran. After the shooting of Congressman Steve Scalise on the morning of June 14, 2017, Wenstrup attended to the wounded congressman until he was transported to MedStar Washington Hospital Center.