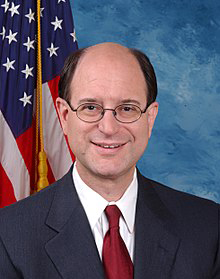 Sherman was born in Monterey Park, the son of Lane and Maurice Hyman Sherman. His parents were both of Russian Jewish descent. He attended Mark Keppel High School and Corona del Mar High School. He received a B.A. in political science from University of California, Los Angeles in 1974 and a J.D., magna cum laude, from Harvard Law School. in 1979. He is also a tax law specialist and Certified Public Accountant.[5] Before joining Congress, Sherman was on staff at one of the nations’ big-four CPA firms. While at the firm, he audited large businesses and governmental entities, provided tax law counsel on multimillion-dollar transactions, advised entrepreneurs and small businesses on tax and investment issues, and helped represent the Government of the Philippines under President Aquino in a successful effort to seize assets of deposed President Marcos. Sherman was also an instructor at Harvard Law School’s International Tax Program.

Tweets by https://twitter.com/BradSherman
Subscribe
Please login to comment
0 Comments
Inline Feedbacks
View all comments
wpDiscuz
0
0
Would love your thoughts, please comment.x
()
x
| Reply
You are going to send email to