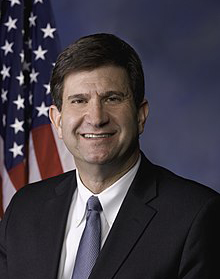 Bradley Scott Schneider (born August 20, 1961) is an American politician serving as the U.S. Representative for Illinois's 10th congressional district since 2017, previously holding the position from 2013 to 2015. Before he was elected to Congress, Schneider worked as a management consultant and industrial engineer in Deerfield, Illinois. A member of the Democratic Party, he was first elected in 2012. In 2014, he lost his bid for re-election in a rematch against former Republican Congressman Robert Dold. Two years later, he defeated Dold in a second rematch.

Tweets by https://twitter.com/RepSchneider
Subscribe
Please login to comment
0 Comments
Inline Feedbacks
View all comments
wpDiscuz
0
0
Would love your thoughts, please comment.x
()
x
| Reply
You are going to send email to