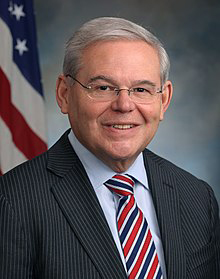 Robert Menendez (/mɛˈnɛndɛz/; born January 1, 1954) is an American politician serving as the senior United States Senator from New Jersey, a seat he has held since 2006. A member of the Democratic Party, he was first appointed to the U.S. Senate by Governor Jon Corzine, and was later elected Chair of the United States Senate Committee on Foreign Relations in January 2013. He stepped down from that post in April 2015 upon being indicted on federal corruption charges.