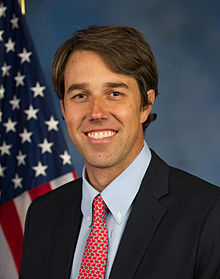 Robert Francis "Beto" O'Rourke (born September 26, 1972) is an American politician and businessman serving as the U.S. Representative for Texas's 16th congressional district. He is a native of El Paso and was first elected in 2012. He is the Democratic nominee in the 2018 Texas Senate race, running against Republican incumbent Ted Cruz.

Beto’s got a great political future ahead! Harris/O’Rourke 2020!

Lol. Beto’s done. Gave up his seat thinking he could beat Cruz? Okaaaay.

0
wpDiscuz
2
0
Would love your thoughts, please comment.x
()
x
| Reply
You are going to send email to