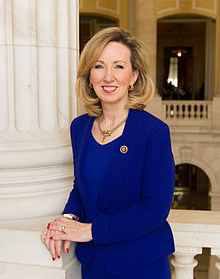 From 2010 to 2014, she was a member of the Virginia House of Delegates. She first won election to her seat in 2009. She has worked in numerous positions for various government agencies, including as chief counsel of the House Government Reform and Oversight Committee, director of public affairs at the Department of Justice, and as a Congressional staffer. She is a founding partner and co-principal of the public relations and public policy firm Corallo Comstock.