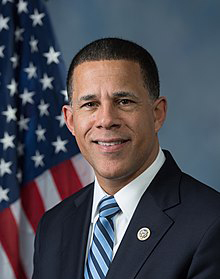 Anthony Gregory Brown (born November 21, 1961) is an American lawyer and politician, who is currently serving as the U.S. Representative for Maryland's 4th congressional district. He previously served as the eighth Lieutenant Governor of Maryland, from 2007 to 2015. He was elected as lieutenant governor in 2006 on the Democratic ticket with Governor Martin O'Malley, and both were reelected in 2010. In 2014 he ran unsuccessfully for Governor of Maryland, losing to Larry Hogan. Brown previously served two four-year terms in the Maryland House of Delegates, representing Prince George's County. He is currently a Colonel in the United States Army Reserve, having served in the U.S. Army for nearly thirty years. While lieutenant governor, Brown was one of the two highest-ranking elected officials in the nation to have served a tour of duty in Iraq.

Tweets by https://twitter.com/RepAnthonyBrown
Subscribe
Please login to comment
0 Comments
Inline Feedbacks
View all comments
wpDiscuz
0
0
Would love your thoughts, please comment.x
()
x
| Reply
You are going to send email to