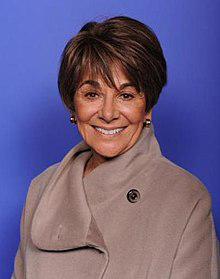 Anna Georges Eshoo (born December 13, 1942) is the U.S. Representative for California's 18th congressional district, serving in Congress since 1993. She is a member of the Democratic Party. The district, numbered as the 14th District from 1993 to 2013, Silicon Valley, includes the cities of Redwood City, Sunnyvale, Mountain View and Palo Alto, as well as part of San Jose. She is the only Assyrian American in Congress, and is also one of only two congresswomen of Armenian descent, with Jackie Speier being the other. She is Assyrian paternally and Armenian maternally.