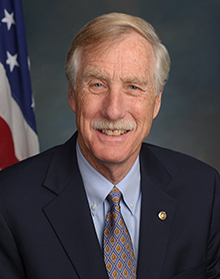 Angus Stanley King Jr. (born March 31, 1944) is an American politician and attorney serving as the junior United States Senator from Maine since 2013. A political independent since 1993, he was the 72nd Governor of Maine from 1995 to 2003.

King won Maine's 2012 Senate election to replace the retiring Republican Olympia Snowe and took office on January 3, 2013. For committee assignment purposes, he caucuses with the Democratic Party. He is one of two independents currently serving in the Senate, the other being Bernie Sanders of Vermont.