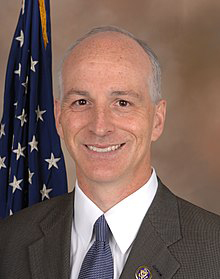 David Adam Smith (born June 15, 1965) is an American politician. A Democrat, he has served as a member of the United States House of Representatives since 1997, representing Washington's 9th congressional district. Smith served in the Washington State Senate from 1991 to 1997. He was just twenty-five years old at the time of his election in 1990, defeating a 13-year incumbent Republican, Eleanor Lee, to become the youngest State Senator in the country. Smith won his seat in the U.S. House of Representatives in 1996 by defeating another incumbent Republican, religious conservative Randy Tate. Smith hasn't faced serious opposition since, as what was originally drawn as a swing district turned into a fairly safe Democratic seat.

Smith's district was significantly redrawn after the 2010 census. It absorbed much of southeast Seattle, as well as most of the Eastside. As a result, it became the state's first with a majority of residents who are racial or ethnic minorities. It is also the second-most Democratic district in the state; only the neighboring 7th district, which covers the rest of Seattle, is more Democratic. For the 2012 election, Smith moved from his longtime home in Tacoma to Bellevue.

Tweets by https://twitter.com/RepAdamSmith
Subscribe
Please login to comment
0 Comments
Inline Feedbacks
View all comments
wpDiscuz
0
0
Would love your thoughts, please comment.x
()
x
| Reply
You are going to send email to