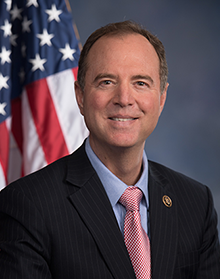 Adam Bennett Schiff (born June 22, 1960) is the U.S. Representative for California's 28th congressional district. A member of the Democratic Party, Schiff has served in Congress since 2001. Schiff represented the 27th and 29th Districts between 2001 and 2013, which initially included the areas of Alhambra, Altadena, San Gabriel, Burbank, Glendale, South Pasadena, Temple City, Monterey Park, and Pasadena. In 2010, his district's boundaries were re-drawn to include, among others, La Cañada Flintridge, La Crescenta-Montrose and Sunland-Tujunga, as well as large slices of central Los Angeles including Hollywood, the Hollywood Hills, West Hollywood, Echo Park, Silver Lake, and Los Feliz. (Burbank, Glendale, and the western part of Pasadena all remained in his district.)

Hey Adam, can we get some Trump tax returns for Christmas?

You liberals need to find something new to stress about.

-1
wpDiscuz
2
0
Would love your thoughts, please comment.x
()
x
| Reply
You are going to send email to