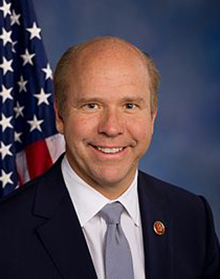 John Kevin Delaney (born April 16, 1963) is an American politician and businessman who has been the United States Representative for Maryland's 6th congressional district since 2013 and is running for President of the United States in 2020. The district, the state's second-largest, includes nearly the entire western portion of the state, but the bulk of its vote is cast in the outer suburbs of Washington, D.C. He is a member of the Democratic Party.

On July 28, 2017, Delaney became the first major Democrat to announce he is running for president in 2020.